Naughty Dog ‘Wishes’ It Was Working on New Jak…

As we put the finishing touches on Warframe to launch on PlayStation 5 this Thursday, I couldn’t help but think about the journey that led us here. The Warframe experience has always been about our relationship with you, the Tenno.

Your love for the bullet-jump, which came from a player-favorite bug called coptering. Your never-ending desire to play as Umbra, a simple skin you inspired us to transform into one of the game’s best cinematic stories. Your artistic passion for customization that brought player-created artwork into Warframe as TennoGen. Your devotion has kept us working late into the night to make Warframe amazing for you.

That’s why entering the PlayStation 5 era feels so momentous. For us, it means bringing nearly eight years of evolutionary content into the future for PS5. It means new players experiencing Warframe for free with a brand new graphics engine, up to 60fps and 4K from the very start. It means PS4 players transitioning seamlessly to an all new generation. And it means all the friends you’ve made sticking together, with PS4 and PS5 gamers playing together with cross-generational play — a first for Warframe. 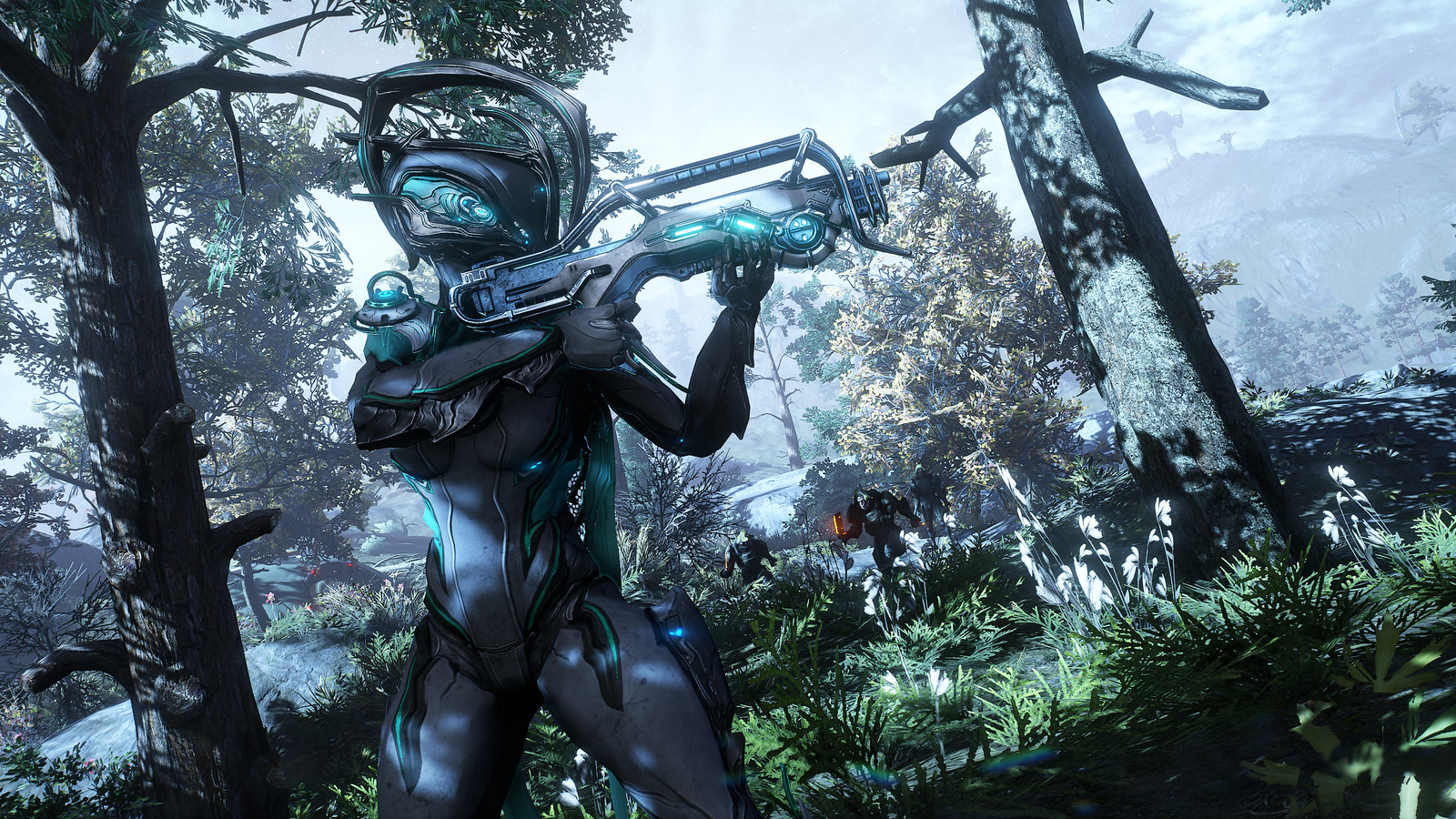 Plains of Eidolon, one of Warframe’s three open worlds, in its next-gen glory!

At the start we were just a small scrappy team with a Space Ninja game that had attracted a modest but enthusiastic following. We had just launched on PC, but the next generation of consoles at the time — PS4 — was imminent.

I can’t speak for others, but for me, showing Warframe for the first time at the E3 was raw excitement. Sony let us have space at their booth. They played our trailer across a massive  two-story screen. Our little punk rock show was on the biggest possible stage for games. I remember walking into the show, seeing our trailer and getting chills. Even Kojima-san himself watched it!

We’ve come quite a long way from our original E3 PS4 launch trailer.

In the first two weeks of launch that November we had more than 300,000 new players. We were more than a million by the time January wrapped. Now, almost seven years exactly to the day, we’re at more than 60 million and launching on next gen, again. It’s still just as hard now as it was then, but we are more excited than ever to put in the work for you.

Wake up Tenno, wake up

Warframe has always begun with you, a lone Tenno, waking from a generation-long slumber. The world and its past, a mystery to discover. At first our story was relegated to the simple things — item descriptions or the environment. But we always had much larger ambitions.

In 2015 you all got to wake up again with our first cinematic quest, The Second Dream. Our whole studio was nervously glued to the screen as we watched your reactions to this twisty story with glee. At the time it felt like we were taking a huge risk, but now it’s one of the most defining moments of my career. And our community’s protection of the secrets within the quest, a long-standing stamp of pride.

All of these updates — The Second Dream, The War Within, and The Sacrifice — quickly became fan favorites. And finally, on PS5 we’ll bring you the next chapter of the story, The New War. A story nearly a decade in the making.

Just the teaser trailer, we must keep the secrets within.

When Warframe opened up

In the summer of 2017, we surprised players again with the reveal of our first open world, the Plains of Eidolon. Seeing your cheers and excitement live as the doors of Cetus opened brought back the same chills from our E3 PS4 reveal four years prior. Only now, we were at our own fan convention, TennoCon! And for some reason, thousands of you had flown to us to see us on our own stage. I bet none of you expected fishing.

Fast forward to our launch on PS5 and Warframe now has three open worlds that have never looked better or loaded faster. Our enhanced renderer really shines here, bringing dynamic lighting that makes each world more immersive than ever before. And now that we’re building content from the start to take advantage of this technology we can’t wait for you to experience our next open world, The Duviri Paradox, on PlayStation 5.

No real fish were harmed in the making of this trailer.

When we launch on PS5 you’ll have 44 Warframes to master, each available for free with their own distinct abilities and play styles. But I’m especially proud of Xaku, our 44th and most recent Warframe released this fall, because they are also the second built from the ground up by our community!

When we first started with four Warframes, we never knew how we’d get to 20, let alone 44! There’s even Octavia — a Warframe whose abilities are built around an in-game music sequencer that you can make or share tunes with the community. But with your inspiration, we did it!

As I turn toward the future, so many things cross my mind.

I can’t wait to hear what players think once they play Warframe for the first time on the PS5. Taking out hordes of enemies with a butter-smooth framerate and jumping into each mission in a snap. Experiencing our story and worlds with our new enhanced renderer that will stun them and adaptive triggers that make combat even more immersive. I can’t wait to play with you all!

Naughty Dog ‘Wishes’ It Was Working on New Jak and Daxter…